The official Voter Guide, issued by each state, is paid for by you, the taxpayers, and mailed to every registered voter. Every candidate, and their Candidate Statement, should be included for purposes of educating voters. But this is not the case. The State charges candidates $25 per word - and a minimum of one word is required.

In 2016, U.S. Senate candidates paid over $6,000 for a full paragraph Candidate Statement. This was in addition to a $3,480 Filing Fee. By purchasing an entire paragraph, candidates who were not accepting campaign donations were likely unable to stay under the Federal Elections Commission (FEC) cap of $5,000 in campaign expenditures.

Exceeding the FEC cap of $5,000 requires formation of a Political Campaign Committee, appointment of a Treasurer, and substantial financial paperwork. This politician-created process creates an advantage for candidates who accept campaign donations. Their full-paragraph Candidate Statements actually make a statement. If a Candidate Statement only contains a few words, the candidate appears lazy and unprepared, at best.

Speaking as an engineer, my 2016 Candidate Statement was "01100101". In computer programming, the binary code "01100101" translates to the letter "e", as in equality through electronic voting. This optimally met the State's one-word minimum and was cost effective.

The Voter Guide is critical to election process because it educates voters about their voting options. It should be neutral. As long as the Voter Guide is taxpayer funded, the State should not discriminate based on wealth (campaign funding). Every candidate should be listed, including a full paragraph Candidate Statement. There were 34 candidates on the 2016 Ballot, but only 21 were listed in the 2016 Voter Guide. 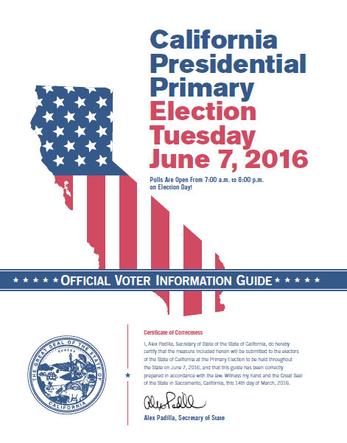